Two days after the Parkland school shooting in Florida, I felt the impulse, as I have many times over the past 15 years, to call Mister Rogers on the phone. Fred had been there for me during trying times before, during a lingering illness, a difficult move to a new city. I sometimes sought his advice about my children, who were toddlers when we first met. He knew what to say when my daughter was scared to go to the dentist; he helped me navigate my son’s first expression of sadness. I truly believe he would know what to say to those young students, to the grieving families, to a nation in turmoil.

But he’s no longer here to call. So I sat down at my computer and watched the raw footage of my television interviews with him, conducted over 20 years ago.

By the time I visited his Neighborhood for the second time, we were already friends. Fred and I had been writing letters back and forth for two years. That was the reason for my visit, to talk about the thousands of letters Mister Rogers received each year from children, teenagers, and adults.

I don’t think he would have ever imagined that one day he would be issued his own postage stamp, three days after what would have been his 90th birthday. But the honor is well-deserved because despite the deluge, he personally answered each and every letter.

We had just begun to talk about some of his favorite letters when he suddenly switched topics. He had done this before when something was weighing heavily on him. His tone changed from gentle to urgent.

“One of the paramount things I feel that the world needs to do is to be able to deal with the anger that so many people feel, and I like to think that the Neighborhood offers a smorgasbord of ways of saying who you are and how you feel. And we’ve heard from people, as a matter of fact, through the mail that say, ‘I started to do something and I realized that it wasn’t right and I was able to stop. And do you know I thought of your song:

‘It’s great to be able to stop

And be able to do something else instead

And think this song.’”

He was quoting the same song he had famously read before a Senate Subcommittee in 1969. The fate of public television hung in the balance, and Mister Rogers issued an appeal that garnered goosebumps and $20 million from self-proclaimed “tough guy” Senator John Pastore. The video of Fred’s recitation of the lyrics to “What Do You Do with the Mad that You Feel” went viral, so recognizable that it was recently reenacted on Comedy Central’s Drunk History by Colin Hanks, whose father Tom Hanks will portray Mister Rogers in an upcoming biopic.

“That good feeling of control,” he continued, sitting across from me on the living room set of Mister Rogers’ Neighborhood. “It’s so scary for anybody and particularly for children to feel out of control.” Leaning in, he drove the point home with an example from my own family. “And I mean when Jonathan is angry with you, there are things that he knows he can do like drawing pictures that won’t hurt him or anybody else. What a gift you’ve given to that child!

“To let him know that he doesn’t have to hit you; he can tell you in other ways.

“Well, you know, I’m passionate about that.  I just feel that we need to help children from the earliest time to realize that there are ways that they can express how they feel, ways that aren’t hurtful.”

Later in the interview I ask him a question on behalf of a little boy, who wants to know what Mister Rogers does when he gets angry.

Fred looks straight into the camera and answers the child directly:

“I like to swim and so I swim extra hard when I’m angry.

“And also when I was a little boy, about five years old, I learned that I could go to the piano and play real hard on the piano and that helped me, it really did.

“There are many things that you can do when you’re angry that don’t hurt you or anybody else.”

I stop the video and sit back in my chair, struck by the timeliness and relevance of his words. Words spoken so many years ago, before Parkland, before Sandy Hook, before Columbine. I had come to him longing for a message to a hurting nation, and I had found it. A message for the perpetrators, a consolation for the victims, an encouragement for protesters. For those who still want to know what to do with the mad that they feel. Because what Mister Rogers offered children, what he still offers them, is both an understanding of difficult feelings and a way out— a way that doesn’t hurt them or anybody else. 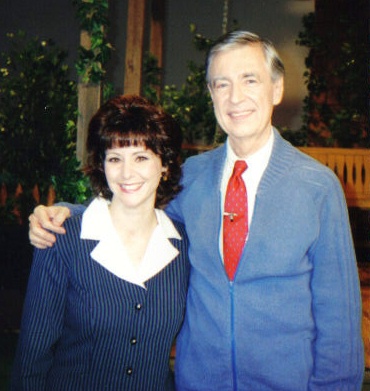 Amy Hollingsworth is the author of five books, including the bestselling The Simple Faith of Mister Rogers and the newly released Runaway Radical, coauthored by her son, Jonathan.

Before writing books, Amy wrote for various magazines and was a television writer for eight years. In 2010, she was named one of USA Today’s Top 100 People for her influence on pop culture and was featured in the documentary by MTV’s Benjamin Wagner titled “Mister Rogers & Me.”  Her television appearances include WGN’s Morning News, PBS’s A Word on Words, and FOX Morning News. A former psychology professor, Amy lives in Virginia with her husband Jeff.

Our friends at FaithGateway shared an excerpt of The Simple Faith of Mister Rogers. Free reading ahead!

The Simple Faith of Mister Rogers Blew My Mind

There are photos of me as a young, diapered toddler staring intently at the television screen, my eyes trained on a kind and soft-spoken man in a buttoned-up sweater (I suspect the reason there are […]

Have you ever listened to a speech or read something in a book, and felt like the words you heard were being spoken directly to you? If you are following along and reading The Simple […]