Get your beach bags prepped and ready for your next beach read, friends. J’nell Ciesielski, the queen of smart and beautiful historical romance—The Socialite, Beauty Among Ruins, and Among the Poppies, anyone?—is at the top of her game with her latest novel The Ice Swan. It's swoony and adventurous and will for sure cool you down on a sunny, sandy day.

I know what you're thinking: how can a book with the word Ice in the title, called a romance, and paired with a chilly-looking cover, be a beach read? Hear me out. Ciesielski has a magical way with words, managing to tell a realistic and impeccably researched historical story with a set of moving characters. The detailed settings and cultural notes add a richness to the story. The chilly vibes of the book—Russia, poverty, war—will keep you from overheating in the sunshine. Just make sure you wear sunscreen, because you may end up reading for hours (and hours) without noticing. It's just that good. 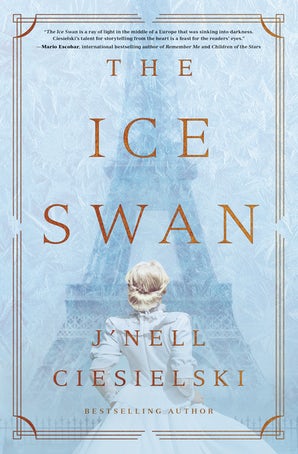 The Ice Swan is set in 1917 in Paris, where Russian Princess Svetlana Dalsky and her mother and sister have landed after fleeing their home amid the Russian Revolution, leaving behind Svetlana's father and brother. The city is devastated by the Great War, and violence and uncertainty follows the Dalskys wherever they go. They are forced into hiding in a church basement with only the clothes on their backs—and the jewels they sewed into their corsets before their terrifying escape. The family is targeted by the Bolsheviks, who wish to remove all Russian nobility from existence, and so their sole mission in Paris is to remain safe and hidden.

When Svetlana sustains a minor leg injury and visits a hotel-turned-hospital for treatment, she is cared for by the brilliant and caring World War I army surgeon Wynn MacCallan, the son of a Scottish Duke whose goal is to be useful, not merely royalty. He becomes enraptured by the cold, mysterious beauty and one day follows her to the White Bear Club, an underground Russian club known for drinking, dancing, and gambling, where Svetlana has been ballet dancing to pay off her mother's gambling debts. But Wynn can't let that stand. He offers Svetlana a marriage of convenience, to protect her and fully pay her family's debts. It's what a good, noble man would do. In the back of his mind, though, he's hoping for a true, romantic marriage. But then the Bolsheviks arrive in Paris, making the new couple run to Scotland for a second round of hiding.

No matter how much running they do, though, the love that's slowly growing between them is impossible to ignore.

The Ice Swan has it all: It's historical! It's adventurous! It's romantic! It's told in alternating perspectives between Svetlana and Wynn, providing an oh-so-satisfying slow burn of a romance alongside the detailed story unfolding around them. There's also the rocky undercurrents of wealth, class, and privilege: Svetlana's family went from prosperous royalty to poverty in a matter of days, meaning the former Russian princess had to learn how to live in the world as a person without means.

I'm chilly just thinking about it and looking at that gorgeous cover all over again. If you're a lover of historical fiction, romance, Russian history, royalty, or all of the above, J’nell Ciesielski's The Ice Swan is definitely the perfect beach read—but also couch read and coffeeshop read and anywhere else you like to read.
Share Tweet Pin